August 14
On August 13, South Korea and North Korea
held ministerial talks at Panmunjom and
agreed to hold an “inter-Korean summit talks”
in Pyongyang in mid September. It is the third
time that the two leaders will meet.

July 29, 2018
North Korea carried out the return of the remains of US soldiers. 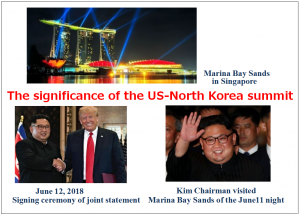 (以下 2017年)
December 22, 2017
The United Nations Security Council unanimously adopted the “additional sanction resolution”, which was a strict one to reduce the export of refined petroleum products to North Korea by 90%. Thereafter, nuclear tests by North Korea and missile launches have not been implemented.

November 29,
North Korea launched a larger ballistic missile “Mars 15”,
the missile reached an altitude of about 4,500 kilometers and flew 960 kilometers over 53 minutes.
This was concluded that if it was launched in ordinary or bit, it would have a range of 13,000 km, and it could cover the entire US including the East Coast of the United States.

October 2017
The Iraqi army suppressed eastern Mosul.
The head of IS escaped Mosul.

October 17
Announced that the armed militia organization “Syrian Democratic Army” (SDF), a Kurdish-dominated body that had been supported by the U.S. military, etc., completely controlled Syrian northern part of Rakka, which the extremist group IS had regarded as the “capital” . In the near future, the declaration of liberation will be announced from IS control over 3 years.

September 11
the United Nations adopted a
“Unanimous Sanction
Resolution” against it.

September 3
North Korea conducted the “Sixth Nuclear
Test”.  the largest ever in the past.

August 29
the North launched a ballistic missile “Mars 12”, a missile passed over Japan’s Hokkaido, landed on the Pacific Ocean with an altitude of 550 kilometers and a level flight of 2,700 kilometers.

August 17
A white supremacist and an equals insisting against opposition of racial discrimination collided and developed into a riot incident.