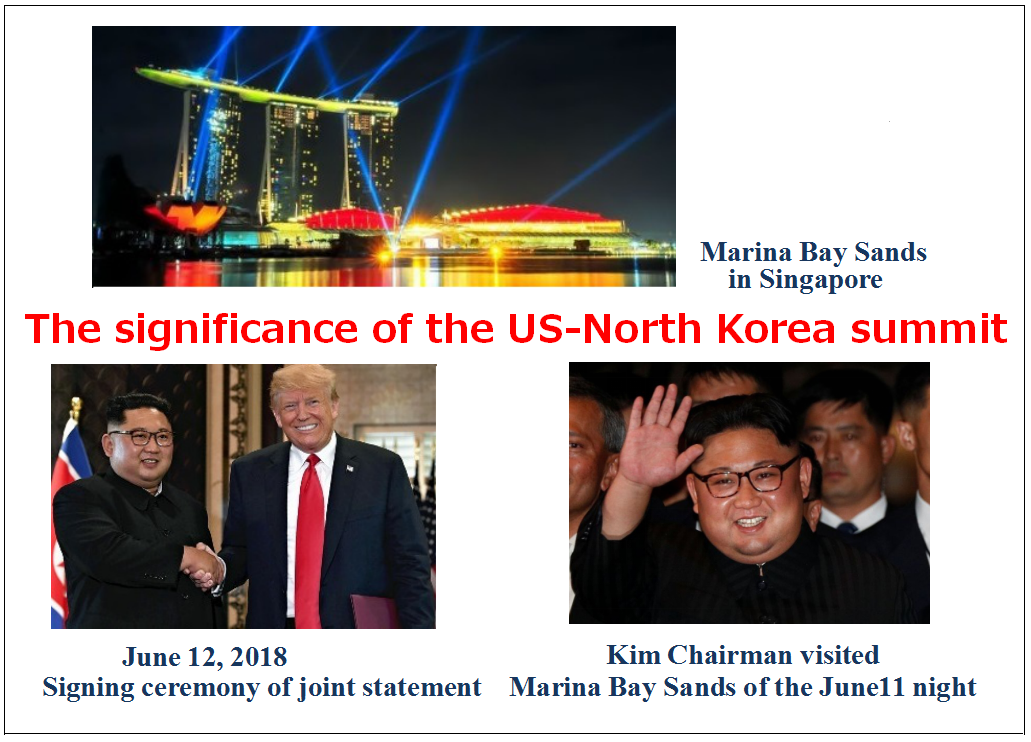 I am thinking that the “North Korea Summit Meeting” on June
12, 2018 ended in great success. Certainly, the four items of
“Complete, Verifiable, Irreversible, Denuclearized” CVID are
not included in the wording of the joint statement, and it is
true that there are many disappointed and dissatisfied voices.
Also many say that “This joint statement is less concrete
than that of 2005″. However, as Pompeo Secretary of State
says “I am not willing to agree on a statement that ends only
as broken”, this statement had been placed the most
emphasis on “Implementation process”.    The Wording “Complete Denuclearization” in this time
statement is extremely few, but it is a promise that the
top leaders met directly and exchanged. The power included
in the wording is not the ratio of past statements.

The statement in September 2005 was certainly concrete,
however, in July of the following year, North Korea launched
a long-range ballistic missile “Taepodong” and in October
they made the first nuclear test forcibly, and this statement
has been broken. This time statement must not be so.
As the background of a powerful joint statement,
it is necessary to build deep and strong trust relationships
among the leaders. I see that it was a summit meeting to
build that trusting relationship.

The day before the US-North Korean summit,
Kim Jong Un chairman is visiting Marina Bay Sands.
While looking at the beautiful night view of Singapore,
what was the thing being in the heart of Kim chairman
at this time?   It would be the people of North Korea
who have shared suffering and pleasure for a long time
with him. “I want the people and comrades of my home
country to feel this pleasure that I feel now”,
also “I want them to be truly happy” — these feelings ooze
deeply into the first word that Kim Chairman said when he
met President Trump next day. “The way to come so far was
not easy. I have overcome all things and came up here.”
The leader’s hearts are always with the people.
When the people suffer, leaders also suffer and
when the people are pleased, leaders are also pleased.
A leader with such a heart is the true leader.
If Kim Jong Un and North Korea intend to follow the path to
a peaceful international nation in the future, he must have
such heart to the people of the whole world.
Because, Wishing for the happiness of the people of the
world realizes the happiness of his own country’s people
in a true sense.

In the background that President Trump has chosen
“Singapore” as a meeting place, it is thought that there
was a desire to show Kim chairman a beautiful night view
called Oriental pearl and let  him to know the preciousness
of peace. In addition, the president probably would have
had such a Romance, Hope and Consideration as
“I want (young) Kim to be a leader who really wishes
for international peace”.
In the future, there will be various paths to the way to
“Complete Denuclearization”. However, if the people of
the whole world puts “The happiness of all people” as
the starting point of the idea, and backs up what the US
and North Korean leaders tried to do, that will be realized.