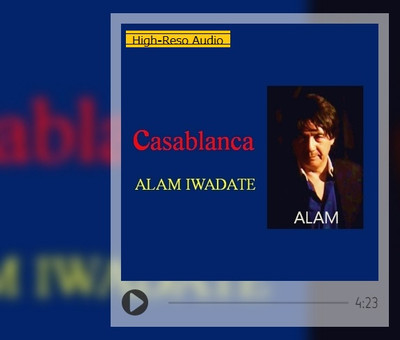 This song is recollection of a
past love affair in Casablanca

This song is a recollection of a past love
affair in a place called Casablanca.
The very romantic lyrics are about
the events that lead to the two
falling in love. That is, one summer’s
night, the two were watching a movie
at a drive-in theater while snacking on
popcorn and cola when suddenly
the popcorn and cola turn into
champagne and caviar.
And, when he looks into her eyes,
he sees the Moroccan Moonlight ――
In the desert in Morocco, Africa,
the full moon blazes as it rises above
the night,  and its clear light is reflected
in her eyes.
In verse 3, the “I guess our love story
will never be seen on the big wide
silver screen, but it hurt just as bad
when I had to watch… ” lyric creates
an unique ambience where there are
nostalgic feelings for past events and
the person’s current reality melding
with the movie’s story. Today, Casablanca
is the name of the capital of Morocco,
formerly a French colony.

Casablanca is a American romantic
drama film which was released in
1942 when the US entered World
War II. Directed by Michael Curtiz.
The film stars Humphrey Bogart,
Ingrid Bergman, and Paul Henreid.
A theme song, Casablanca adopted
“As time goes by” written by Herman
Hupfeld in 1931 for the Broadway
musical “Everybody’s Welcome”.
1942 was the midst of the Second
World War, and Hitler’s Nazis was
raging in Europe. In that situation,
a lot of people fled into Casablanca
in Morocco, Africa. Also, there were
a lot of people going to the United
States from now on.
Morocco was the French territory
at that time, however, France at that
time had fallen to Germany. In the
movie,  “Anti-German scene” which
supports “Free France” resisting Nazis,
appears many times. Within this
background, movies proceed as
romantic dramas.