#ffff00;”>8 In preparation for the near future

AI weapons that threaten future society
The reason why I talked about
“the role of the law” or “relationship
between law and people” in detail
so far is to expand and strengthen
the power and efficacy of good deeds
done by people (individuals) on a daily
basis.
Why is it necessary to do so?
That is because many problems
that occur in society, including
international affairs, are still often
occurring on a huge scale, such as
where they are out of reach by the
power of individuals. From now on,
this tendency will become
increasingly prominent.
What I worry in particular is that
science develop increasingly and
coming from the age of the Internet
of Things (IoT) and both AI and
robots will be more and more
developed. It is about the situation
that the human society faces at
that time. For example, there is
currently research to make robots
fight as combatants. That is, they
are called robot weapons or AI
weapons, and let robots fight each
other instead of humans.
It is a system in which the present
“LaWS (autonomous lethal weapons
system)” is highly developed in the
future.

The current LaWS means “Laser
Weapon System” and its origin is
“Laser Weapon” by adjusting the
output of individual laser array.
It has the function of destroying the
target at high power output and
raising or destroying the sensor
temperature of the target at low
power output. 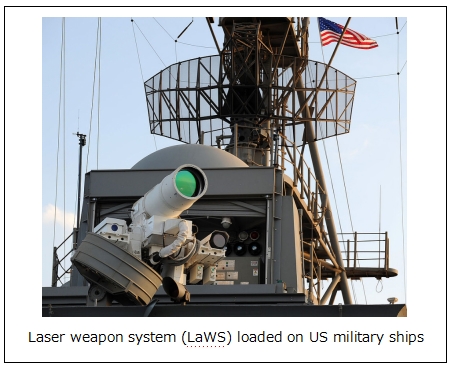 In September 2014, LaWS ships
deployment was declared as an
operational asset by the United
States Navy. Based on the UN’s
“Comvention on Certain
Conventional Weapons (CCWC)※”,
human beings are not included in
the target, but UAV※, helicopters
(combat drones), high-speed patrol
vessels, etc. are targeted.

The US Navy has released a video in
which a ship deployed LaWS disables
the UAV’s scan eagle, explodes RPG
bullets, and burns composite boat
engines.
“Robot weapons or AI weapons”will
appear in the era when these systems
were highly developed, and at that
time there are three main dangers:

One is the point where there are many
possibilities of accidentally attacking
humans and harming human life due to
minor errors that occur in the electronic
system or phenomena that occur
suddenly (unexpectedly). Considering
the robot’s strong killing ability,
if it happens, that will cause great damage
to civil society.

Second point is that the robot weapons
rely completely on the operation of
the AI and automatically continue
attacking, so there is no room at all
for “human conscience and emotion”
to work. Therefore, the movement
causes “ethical disconnection” with
the human mind. If that happens,
robotic weapons will continue to
attack ruthlessly without being
controlled under any circumstances.

The third point, which is most feared,
is that the appearance of AI-led robotic
weapons, including LaWS, may change
the way of war in human society from
the root. In retrospect, nuclear weapons
that began in the twentieth century
fundamentally changed the way of war
until then, because of their huge
destructive power.
However, LaWS can be manufactured
at much lower cost than missiles and
nuclear weapons, moreover, it has a
powerful killing ability. If it combines
with AI and robot weapons, it can
bring about changes to human society
beyond nuclear weapons.
If it is abused, or a number of Al
weapons holding countries like a
nuclear holding country, have
appeared, and the times of fighting
with each other etc…  the mind
becomes dark just by imagining.
Voices that point out the dangers of
the above points are rising from each
field.

Three fundamental solutions
At present, the following three points
can be mentioned as a remedy for it.
One is the enactment of UN law that
will greatly strengthen the regulation
of LaWS. At present, LaWS has not
been in Full-scale practical deployment,
but at the research and development
stage. However, once a country
appears to introduce it in the future,
as I mentioned above, it can be as
serious as the birth of nuclear
weapons for human society.
Therefore, it is necessary to take
measures while we have time.
In today’s stage there is no ban treaty
that regulates LaWS. Therefore, it is
necessary for the United Nations to
launch a “Negotiating Conference
and Expert Meeting” aimed at its
establishment as soon as possible.
Whether it is the United Nations law
or the international law, once the law
is enacted, it has a powerful power to
direct the way of the future nation and
the way of the world.
For example, as I mentioned above,
even the U.S. Navy takes action “not
target humans” in accordance with
the UN “Comvention on Certain
Conventional Weapons※ (CCWC)” law.
Such “effect of the law” will surely
continue to function in the future society.

※CCWC: abbreviation for Convention
on Certain Conventional Weapons. It is
a “multilateral treaty” that prohibits or
limits the use of conventional weapons
that are found to produce excessive
injury or indiscriminate effects.It was
adopted by the UN General Assembly
in 1980 and entered into force in 1983.
As of July 2009, the total number of
parties was 109.

The second is to thoroughly implant the
thoughts and ideas that cherish human
life in the AI system from all angles.
This is because the future robot weapons
move under the initiative of AI.
In addition, it is to create up the civil
movement that appeals the danger of
such a system on a global scale.
For example, NGOs currently participating
in the activities of “Stop the Killer Robots”
in the world’s civil society have spread to
80 groups in 51 countries. And the
citizens continue to explore the way of
using AI and robots for human happiness
from the standpoint of civil society.
The power is greater than imagined.

Third, 1 and 2 mentioned above are the
embodiment of the act of human good
and the work of the good wisdom.
Therefore, they can be expanded and
strengthened by the power of “the law
of the origin (Buddha-nature)” existing
in the all phenomena world.
In the procedure, first, the motions of
the AI and the robot are regarded as
one of the “movements of phenomena”.
Next, you use the power of the law of
the origin existing in the all phenomena
world to manipulate those phenomena
(AI and robot movements) so that they
do not run in the wrong direction.
As mentioned at the beginning of this
paper, the law of the origin is existing in
all phenomena world and managing
the movement of all phenomena. The
phenomena also include the motion of
electrons and elementary particles that
are the motive force of the motion of AI.
The law of the origin is a law that
managing all movements from atoms,
nuclei, elementary particles, and quarks
in the ultimate world under the concept
(characteristics) of “Mercy”.
Without such a law, the future human
society can not be led to peace and
prosperity. The halfway law can no longer
rescue the future human society.

However, I talk many times, but the
characteristic of this law is Passive to
the last. It is the first time to exert
power by the act of the person of
Active (Act of your good).
Therefore, as long as there are the
good deeds you do day by day and
the practice of the mercy and wisdom
of Act ① and ②, and their work,
stability and peace will surely be
brought to the future human society.

Other problems that pose a threat
Next, there are still many concerns
about social trends other than science.
For example, nuclear tests with
unknown intention or objective,
forcible launch experiments on
ballistic missiles, Large and small
gun crime by madman and terrorist,
Indiscriminate suicide bombing aiming
at large cities (September 11, 2001
Terrorist attacks in the United States,
Gun shooting in Las Vegas in 2017etc.),
Ethnic problems and racial
discrimination problem with deep root.
In recent years, Intensified trade war
between the US and China, Possibility
of stock price crash, Various national
conflicts, ethnic conflicts, religious
conflicts, various conflicts and the
like as seen in the Middle East are
global gunpowder stores.
Other, refugee problems, poverty
problems, crime, problems of
expanding economic disparity,
Various problems in the educational
world that occur on a global scale
(Words and violence hurting children’s
hearts).
Marine pollution by plastic garbage,
Global warming by carbon dioxide.
The sharp decline of the glaciers in
the Arctic and Antarctic, Various
environmental pollution, abnormal
weather.
Cyber crime on the net, Relationship
between robot and person concerned
as mentioned above — Other, until
large-scale illegal poaching in Africa,
crime, conflict, terrorism, poverty,
education problems, etc.
Even one of these is a problem that
can not be easily thought out. If you not
to be careful, these will cause enormous
damage to innocent people.

I think that those who essentially solve
these problems are basically “citizens”.
Because citizens are sovereign of the
highest powers under democracy.
The power of the law expands the
power of the good of that citizens
and substantially realizes that. That is,
the power of the law makes the
citizen a substantial sovereign of
Supreme Power.
Therefore the power of goodness
that the citizen perform is originally
mighty. It also acts extensively.
It is possible to solve problems of
big scale as well as problems
occurring in distant places, if the
citizen expands and strengthens
the power of their good wisdom
and good deeds by the power of law.
Also, “Perfect defense” of many
citizens become possible.